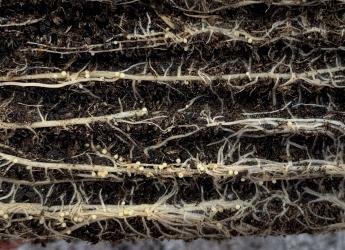 Researchers at the James Hutton Institute and James Hutton Limited are exploring ways to reduce the losses caused by potato cyst nematodes (PCN) in commercial potato production. PCN is an increasing challenge to the UK fresh and processing potato markets, and the target of concerted efforts to protect Scotland’s seed potato and bulb sectors, worth £112m and £7m, respectively, to the rural economy.

At the recent Improving Global and Local IPM conference organised by the Association of Applied Biologists, Hutton researcher Dr James Price presented the results of a study to assess the virulence of Globodera pallida, one of two PCN species present in the UK, populations against specific potato breeding lines.

Several varieties with resistance against G. pallida have recently become available, but these are mainly processing varieties and most varieties grown are still susceptible to the species. The lack of resistant varieties against G. pallida has led to its spread throughout the UK and now infestations in Scottish seed land are threatening the future of potato seed production. Potato breeders are producing novel lines with resistance to G. pallida, some of which combine PCN resistances from more than one source.

The research team looked at how G. pallida populations with different levels of virulence compared against recently developed potato breeding lines from the James Hutton Limited pre-breeding programme. This provided an indication of whether these new potato lines will offer broad-spectrum and durable resistance against G. pallida in the future. Promising lines were identified which were highly resistant to all the G. pallida populations tested.

Dr Price said: “Producing resistant varieties that are attractive to growers and processors is incredibly important if we’re to protect the future of potato production across the UK. However, resistance is only half the battle, and we need to be considering tolerance too. Resistance will reduce PCN multiplication, whilst tolerance will protect yields.

“Ideally we want to grow tolerant varieties with stacked PCN resistances. This will protect yields for farmers and reduce PCN multiplication, ultimately reducing the need for nematicides, saving money and pesticide dependence.”

The work presented at the AAB conference was submitted for publication in a special issue of Annals of Applied Biology, and if accepted, the publication should be available by the summer of 2022.